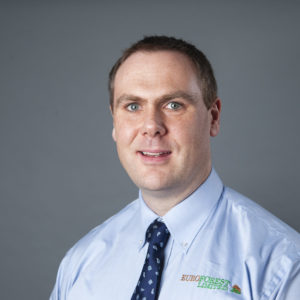 Steven developed a passion for forestry on a school work placement on the Duke of Westminster’s Estate at Abbeystead in 1996. During which, he worked with the forestry department planting, helping in the sawmills & undertaking general estate works.

Upon leaving school in 1996, Steven studied Forestry at Newton Rigg College for 2 years at National Diploma level and a further 3 years undertaking an HND in forestry. During the 5 years he worked weekends for a local forestry contractor felling, planting, fencing etc, to gain valuable hands on experience.

He carried out a mid-year placement with the Forestry Commission in Dumfries & Galloway in 1999-2000 where he gained valuable experience in timber harvesting & marketing and made contact with various sawmilling and marketing companies. One of which was Euroforest who employed him after completing college in 2001. Steven has been with the company for 18 years.

Steven started as a trainee manager, after 3 years I was promoted to contract manager, after 5 years he was appointed area manager and most recently he’s been made general manager.

Steven has been based in South Scotland for 18 years and harvests and markets in the region of 300,000/tonnes per annum. Around 40,000/tonnes of which is thinning.